For full-blown château splendour, you can't top Chambord, one of the crowning examples of French Renaissance architecture, and by far the largest, grandest and most visited château in the Loire Valley. It's worth picking up the multilingual audioguide (adult/child version €5/2), if only to avoid getting lost around the endless rooms and corridors.Begun in 1519 as a weekend hunting lodge by François I, it quickly snowballed into one of the most ambitious (and expensive) architectural projects ever attempted by any French monarch. Though construction was repeatedly halted by financial problems, design setbacks and military commitments (not to mention the kidnapping of the king's two sons in Spain), by the time Chambord was finally finished 30-odd years later, the castle boasted some 440 rooms, 365 fireplaces and 84 staircases, not to mention a cityscape of turrets, chimneys and lanterns crowning its rooftop, and a famous double-helix staircase, reputedly designed by the king's chum, Leonardo da Vinci. Ironically, François ultimately found his elaborate palace too draughty, preferring the royal apartments in Amboise and Blois; he only stayed here for 42 days during his entire reign from 1515 to 1547.Despite its apparent complexity, Chambord is laid out according to simple mathematical rules. Each section is arranged on a system of symmetrical grid squares around a Maltese cross. At the centre stands the rectangular keep, crossed by four great hallways, and at each corner stands one of the castle's four circular bastions. Through the centre of the keep winds the great staircase, with two intertwining flights of stairs leading up to the great lantern tower and the castle's rooftop, from where you can gaze out across the landscaped grounds and marvel at the Tolkienesque jumble of cupolas, domes, chimneys and lightning rods.The most interesting rooms are on the 1st floor, including the king's and queen's chambers (complete with interconnecting passages to enable late-night nooky) and a wing devoted to the thwarted attempts of the Comte de Chambord to be crowned Henri V after the fall of the Second Empire. On the 2nd floor the eerie Museum of Hunting exhibits a copious display of weapons and hunting trophies. On the ground floor, an interesting multilanguage film relates the history of the castle's construction.In a place of such ostentatious grandeur, it's often the smallest things that are most interesting: look out for the display of hundreds of cast-iron keys, one for each door in the château.Several times daily there are guided tours in English, and during school holidays costumed tours entertain the kids. Outdoor spectacles held throughout summer include a daily equestrian show. 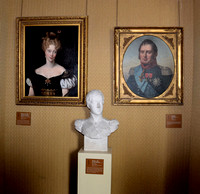