Created 24-Sep-14
346 photos
Contrasting sharply with the elegance of Turin, Genoa is a big crawling port that's almost Dickensian in places, thanks to its narrow, twisting lanes (caruggi) that are more reminiscent of the clamour of Morocco than the splendour of Venice. A once-important trading centre that bred such historic game-changers as Columbus and Mazzini, the city breathes a cosmopolitan air, with remnants of empire evident in its weighty art heritage.
Deep in the maze of the gritty old town, beauty and the beast sit side by side in streets that glimmer like a film noir movie set. Old men smoke languidly outside noisy bars and prostitutes stand like sentries in dark doorways, while on the periphery memories of the great years echo through the gold-leaf halls of the Unesco-sponsored Palazzi dei Rolli – a myriad collection of 16th- and 17th-century 'lodging palaces'.
The Most Serene Republic of Genoa ruled the Mediterranean waves during the 12th to the 13th centuries, before deferring to the superior power of Piedmont. Its crusading noblemen once established colonies in the Middle East and North Africa, and its emblematic flag, the red cross of St George, was greedily hijacked by the English. 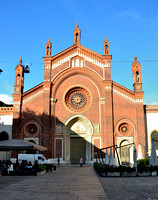