Created 27-Jun-19
33 photos
Many around the globe have heard of Guernica thanks in part to Pablo Picasso. It was this town that was bombed in 1937, the events of which inspired Picasso’s most famous piece of art – “Guernica.” The bombing almost entirely destroyed the city and many civilians perished. Guernica also holds great political importance since it is home to the Guernica Tree, where underneath its branches, Basques were granted autonomy in the Middle Ages. On a lighter note, the city is also host to the Monday Market, one of the most important markets of the Basque Country.
Guernica (“Gernika” in Basque and "Gernika-Lumo" officially) is known throughout the world due to the painting by Pablo Picasso that bears the same name. The painting shows the suffering and tragedy that Guernica endured on the 26th of April 1937. On that day, German and Italian air forces bombed Guernica, destroying everything but a few buildings. The German and Italian forces were supporting Francisco Franco to overthrow the Republican government during the Spanish Civil War. 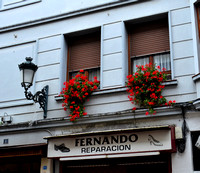