This compact medieval town is built on the islands of five branches of the Sorgue river, 7 km downstream from its source at Fontaine-de-Vaucluse. The river flows through, past, in and around the town, in its many natural beds and several canals. Even without gondolas, water adds a special beauty and character to a town. Sorgue has its many river branches and canals, huge overhanging plane trees and several large, lovely waterwheels. Even if the many mills are no longer working, some of the waterwheels still turn.
Originally known as "Insula", the town officially adopted the name of "L'Isle-sur-la-Sorgue" on 18 August 1890, taking the latter part of its name from the river Sorgue, to which it owed much. As early as the 12th century, the river served defensively as a moat around ramparts which surrounded the town until 1795. The river also served as a source of food and industry: fishing and artisan mills for oil, wheat, silk, paper, woolenry, rugs and dyeing. A busy commerce developed until there were two annual fairs and two weekly markets. The current Sunday open-air market originated on 9 November 1596. 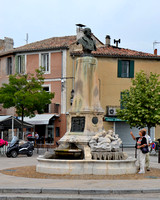 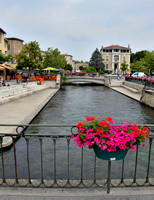 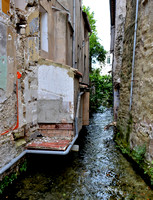 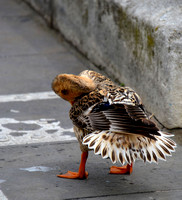