"This luminous place." Rises 564 meters above the river valleys of the Ombrone to the Northwest, the Orcia to the South and the L'Asso to the East. Montalcino encompasses nearly 24 thousand square hectares, half of which is covered in characteristic Mediterranean marshes, native grasses and forests. The Montalcino country side abounds with wild life. It is home to numerous species of animals including the Falcon, Otter, Bob Cat, Badger, Porcupine, Deer, Wild Boar, Pheasant, Hare, Fox and the Gray Wolf to name just a few.

Montalcino's ancient name was Monte Ilcinus after the leccio "holm oak" (Quercus ilex.) The Oaks of Montalcino have covered its hills and valleys from prehistory to present day, sharing their territory with the Olive tree, the Chestnut tree and Montalcino's most famous plant the Brunello grapevine, also known as Sangiovese Grosso.
"From this height, you are left breathless by the panorama," recounted Gabriele D'Annunzio in his great work "The Prank of Buccari," he defines Montalcino as the "window sill of the Apocalypse. On a clear day with naked eyes we see Corsica, the island of Elba, the island of Giglio, the Tyrrhenian Sea, the Apuane Alps, the Abetone, the Consentine with the Sluices of Verna and the Terminillo. Still closer, we see the cities of Siena, Pienza, Montepulciano. We see the long sleeping volcano Monte Amiata casting its shadow over our valley."
Although the history of our area has grown dimmer with the passage of time, recent archaeological discoveries made in Montalcino and in the immediate area surrounding the town are shedding light and facts on what was once only legends and stories. The discovery of Neolithic artifacts in the vicinity of the Ombrone River, the unearthing of a network of villages dating back to the copper and bronze ages, Etruscan and Roman constructions, tombs, foundations of ancient villas have been brought back to the light of day after being buried for more than 2400 years. Proving the stories true that Monte Ilcinus (Montalcino) was than as it is today a flurishing agricultural center, producing and exporting its products, wine, olive oil and cheeses to Rome and throughout the ancient world.
The modern name "Montalcino" first appears in documents dated 814 AD when control over the city was given to the Abbey of Saint'Antimo by Ludwig the Pious. It later gained its independence and became a free commune (free city state). In the first decade of the 10th century Montalcino was settled by refugees from the town of Roselle (located on the Grossetto road some 35 km west). In the 1100s Montalcino established itself as a stratigicly important free city and allied itself with Florence. In 1212 the city fell to the Sienese and came under their control. Not long after the citizens of Montalcino declared themselves free and once again joined with Florence. In 1260 following the defeat of Florence at Monteaperti, Montalcino once again fell to Siena. Because of its stratigic location the treaty with Siena allowed Montalcino to maintain its status as a free city. During the next two and a half centuries Montalcino (heavily fortified by the Sienese) survived five different sieges. In 1555 with the fall of Siena to Florence the Sienese nobles were given refuge within the walls of Montalcino. For nearly 5 years the city was under siege. In 1559 Montalcino surrendered to Florence and Cosimo I. The defeat of Montalcino saw the end of the independent city-states in Italy.The Combined Municipal and Parish Museum of Montalcino, located in the Former Convent of Saint Agostino, is home to art masterpieces from the 12th century forward. On display are paintings by anonymous masters of the Sienese School from the 12th and 13th centuries. Recognized masters of the Sienese School such as Luca di Tomme and Bartolo di Fredi are represented by their masterpieces "Descent from the Cross" and "Crowning of the Virgin".

In other sections behold painted wooden statues from the 14th and 15th centuries and a diminutive bible, The Atlantic Bible, illustrated in miniature by Sienese masters of the 12th century. The museum offers a remarkable collection of terracotta works by Andrea Della Robbia and the most complete collection anywhere of archaic maiolicas (earthenware) created by Montalcino artists from the 12th and 14th centuries.

An archeological section presents artifacts unearthed in the region. Tools and ornaments from the Neolithic, bronze, and iron ages are on view, along with Etruscan funerary urns and vases, and Roman ornamental objects. 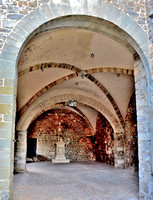 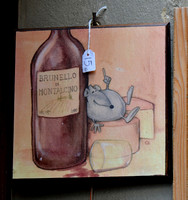 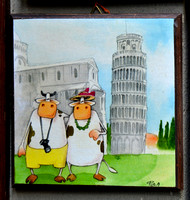