Created 18-May-16
74 photos, 1 videos
The Great Palace at Pavlovsk is somewhat staid in comparison to its near neighbour at Tsarskoe Selo, forgoing that building's opulent ornamentation for classical elegance and harmony, painted in the deep yellow and white colour scheme typical of St. Petersburg neo-classicism.

That the palace achieved such a harmonious facade belies the fact that it was conceived as a much smaller building, with the design expanded and embellished during construction. The task of designing the palace was originally assigned by Catherine the Great to Charles Cameron, the Scottish-born architect who had won the Empress's lasting favour with the work he did at Tsarskoe Selo. Construction began in 1782, but Cameron's modest design and his penchant for the absolute simplicity of Palladianism and the historical purity of Adamesque were not to the liking of Pavel and his wife Maria Feodorovna, and they charged Cameron's assistant, Vincenzo Brenna, with the task of extending the palace and creating a more imposing and regal building. Brenna quickly became Pavel's favourite architect, and went on to design alterations on the palace at Gatchina, and the Mikhailovsky Castle in St. Petersburg. His great achievement, both there and at Pavlovsk, was to combine the future Tsar's eclectic tastes into an organic and harmonious architectural solution. 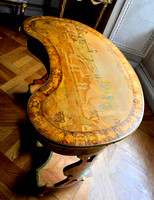