Created 18-May-16
94 photos, 1 videos
The Catherine Palace is named after Catherine I, the wife of Peter the Great, who ruled Russia for two years after her husband's death. Originally a modest two-storey building commissioned by Peter for Catherine in 1717, the Catherine Palace owes its awesome grandeur to their daughter, Empress Elizabeth, who chose Tsarskoe Selo as her chief summer residence. Starting in 1743, the building was reconstructed by four different architects, before Bartholomeo Rastrelli, Chief Architect of the Imperial Court, was instructed to completely redesign the building on a scale to rival Versailles.
The resultant palace, completed in 1756, is nearly 1km in circumference, with elaborately decorated blue-and-white facades featuring gilded atlantes, caryatids and pilasters designed by German sculptor Johann Franz Dunker, who also worked with Rastrelli on the palace's original interiors. In Elizabeth's reign it took over 100kg of gold to decorate the palace exteriors, an excess that was deplored by Catherine the Great when she discovered the state and private funds that had been lavished on the building.
The interiors of the Catherine Palace are no less spectacular. The so-called Golden Enfilade of state rooms, designed by Rastrelli, is particularly renowned and forms the focus of the palace tour. 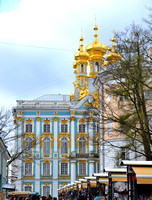