Beneath the plane trees lining Boulevard Béranger, the twice-weekly flower market in Tours provides a splash of color and a heady whiff of fragrance to the thoroughfare, one of several that can justly be described as Haussmannesque. The imposing Belle Epoque City Hall, built by noted native-son architect Victor Laloux bears more than a passing resemblance to the Hôtel de Ville in the nation’s capital. Echoes of the Paris Opéra are found in the opulent Grand Théâtre de Tours, since architect Charles Garnier was involved in its construction. Towering Saint Gatien cathedral, in spite of its ornate facade and owl-eyed twin towers topped with Renaissance belfries, is, on the interior, a Gothic marvel fit for Quasimodo. And in the summer—inspired by the success of Paris Plage—Tours puts on its own beach-party festival on the banks of the Loire, with evening concerts, open-air movies and guinguettes for dancing. 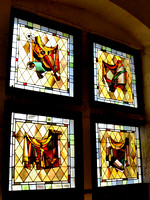