Created 26-Jun-19
63 photos
The Royal Palace of Olite
Olite’s claim to fame is definitely the the Royal Palace of Olite. The palace is often referred to as Olite Castle, probably because it looks more like a military bastion than a residence. It was, however, used primarily as a home for Charles III, the Noble, King of Navarre. In the 14th century, the king commissioned a new palace to be constructed next to the original palace from the 11th century. The Royal Palace of Olite became his favorite residence and is where the Seat of Royal Court of the Kingdom of Navarre was established.
The French-born Charles was more known for his luxurious lifestyle than for his military campaigns. The evidence of which could be seen within the palace’s furnishings and its many courtyards and hanging gardens. In addition, the king kept many exotic animals at the palace such as giraffes and lions. During King Charles reign, the Royal Palace of Olite was said to be one of the most beautiful of Europe. 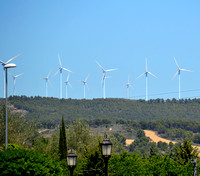 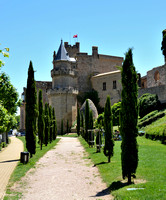